Drought Alert Drought Is Here - Reduce Your Water Use Read On...

The Town of Hillsborough successfully completed the Carolands Gate House Reconstruction Project in March 2010. The Carolands Gate House is a landmark of local significance in our distinguished community, occupying the corner of Ralston and Eucalyptus for over 80 years. The Gate House was reconstructed to retain the architectural integrity of its predecessor while bridging the gap from past to present.

The project was completed by Ionian Construction and funded through generous donations by the Save the Gatehouse Committee, George and Anna Hsu, Sally and Jim Meakin, Scott and Phyllis Bedford, and Mairrtje and Jamie Greene, among many others. A plaque listing all of the major donors has been placed at the gate entrance.

Some select items, such as the historic ornaments from the old Gate House and tiles from the roof, were saved and incorporated into the reconstructed Gate House.

A live-in attendant admitted only owners and friends to the community. To set the tone of European charm and appeal evocative of the Chateau, hand-painted overhead beams, a limestone fireplace, and elegant ornamentation were used. The gatehouse was later used as a town employee residence. The gatehouse was abandoned as a residence in the 1970s and deteriorated over time.

The new Gate House functions as a multi-use outpost for the Hillsborough Police Department. It allows for training, report writing, and acts as an infield department meeting place. It is also capable of serving as a command post for the area or as an emergency operations center. One can expect to regularly see patrol cars and officers around the Gate House. Below are some before and after reconstruction photos. 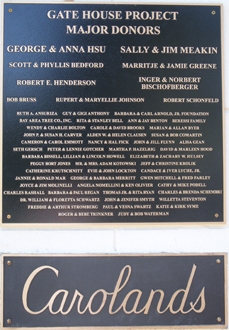